I find it interesting how anti-tax fanatics can camp on to a mantra and then start repeating it as truth. My fav is “People are getting taxed out of their homes.” The louder you cry it and the more emotional you get about it, the more it is accepted as the gospel, I guess.

I’d like to respond by saying “prove it!” Meaning, I don’t believe you. And if it is true, and you are over 65, then I’ve got a solution to offer. All I ask is that we talk with a little civility and respect on all sides. Well, I’ll match the responder’s tone.

Send me examples of people who are being taxed out of their homes. I will need their address. I will keep names and even the addresses confidential. But make no mistake about it, I will publish my findings.

Meanwhile, I would like to respond to those over 65 this way: the state provides that you may not have to pay property taxes until you sell your home. You will eventually have to pay, and you will have to pay 5% simple interest.

The doubter and naysayer will likely respond incredulously to mean “won’t my estate may someday be in the hole?” Well, let’s examine that notion. To be as accurately as possible, I’m picking a home in my neighborhood so I can tie my calculations to a real tax bill.

True. You could focus on that number alone and be mathematically correct if you wanted to be a warp-talker. But you could also compute the compounded growth rate over the 23-year period and learn that the actual annual rate is 2.99%. Gee, I hope the value has grown at least that much in my neighborhood. 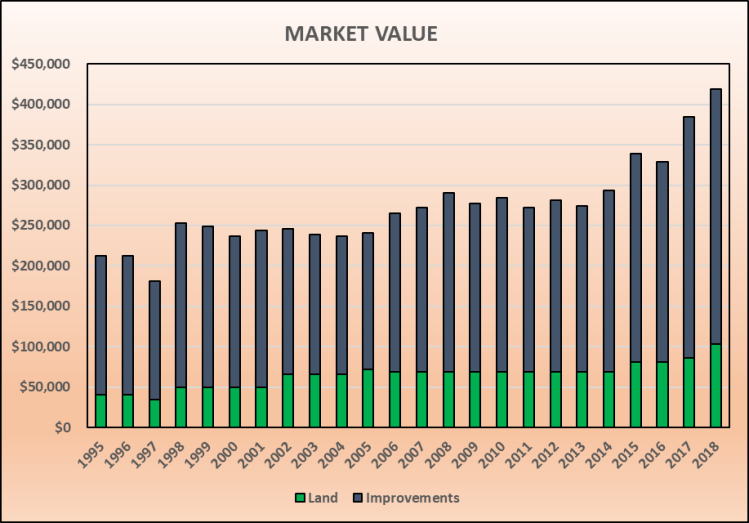 So that means my tax bill has almost doubled, right? Not so fast. Never in history has my tax bill been based on the full market value. There have been generous discounts in the form of exemptions. In recent years, the owner turned 65, so the exemptions have grown in number and size. The actual base upon which the tax rates are applied are $332,936 for the City,  $302,597 for the County and about $251,000 for the School District and College District.

What’s more, the actual tax bill has been frozen for all but the City. Forever. Until the homeowner no longer lives there.

Now, let’s examine a scenario where tax bills in general are compared to home values in general. The combined tax rates for all four taxing jurisdictions equals $2.3772 per $100. Another way of understanding that number is to say property taxes equal 2.3772% of the home value. In other words, If a house value grows at 2.99% and the tax bill equals 2.38%, the homeowner may eventually get all City, County, ISD and College District taxes back when the house is sold – and then some.

The price of living in a full-service city, which benefits the homeowner, children and grandchildren, can be viewed in a different light. The emphasis on CAN BE is intentional. I may choose to be grateful for what I have. You may choose to complain. Your call.

Let’s understand the arithmetic by examining a sample: 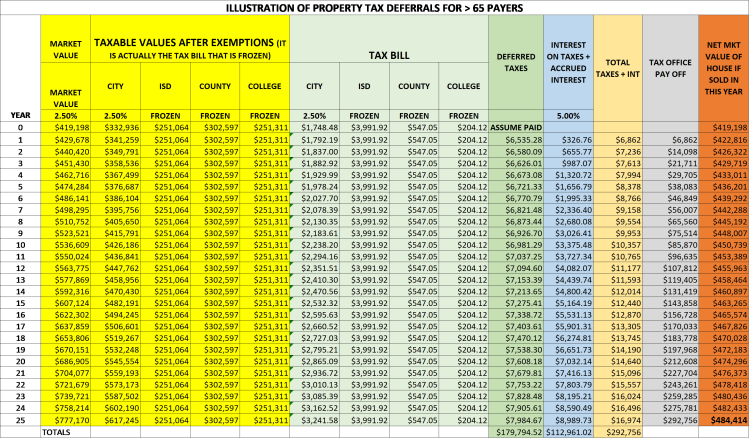 I’m taking my neighborhood example bill and situation and extending 25 years into the future. If the homeowner is 65, then this covers the scenario until the age of 90. One might safely assume the homeowner is no longer living in the homestead before then.

First, one might gasp that a deferred tax bill now about $6,500 annually can extend to just under $8,000 annually (due to the City taxes) in 25 years. You might equally be in disbelief that the home value could increase to $777,170. However, that is what happens when the home value grows at just 2.5% per year.

What About Differing Assumptions?

I’m so glad you asked. This is when I go into my Excel teaching mode to show a feature just for this purpose. Let’s say you wanted to see what happens when the home value growth rate goes from 0% to 8% in 1/2% increments. You also wanted to see what happens if the state changed the interest rate to charge 2% to 8% in 1% increments. The interest rate was recently changed from 8% to 5%, so that assumption should be fixed for a number of years. But let’s see the results.

Boss, you just asked for 136 tables like the one above. Are you sure you want to see that many? And your response as a boss should be that you only want to see the results in the bottom line corner: What will be the remaining equity under these scenarios?

This is where a sensitity analysis (Data Table in Excel parlance) comes in. Here’s what you want to know once you understand the model above: 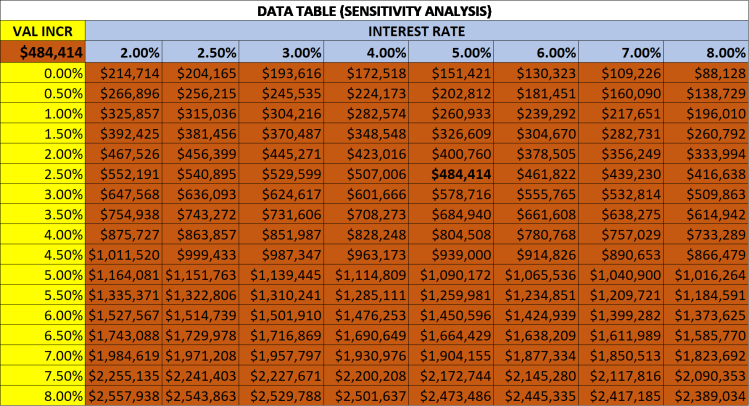 As you can see, the net equity stays positive even if the house value growth increases were zero and the interest rate returned to 8%.

While you now have an alternative to offer those over 65 when they complain about taxes, there could be some hiccups. If they have a mortgage and the note holder balks, then this suggestion might not work. I can’t help you there other than to show them this blog.

Also, all of the air might be sucked out of the room by your city finance folks if this idea is suggested from the dias in a council meeting. There is a fear of losing revenue any time exemptions are discussed, and there should be. However, I have two responses. By the very nature of this legal solution, the tax deferrals are temporary. PLUS they pay 5%. If you have any kind of internal reserves to fund these deferrals, then compare 5% to the rate you are currently earning. Make it happen. Alternatively, my guess is that a local bank would be happy to be the financing party. Bottom line: it’s a legitimate concern with a legitimate answer.

There are already complaints that those NOT in need of this avenue of relief are taking advantage of the benefit. Sorry, I can’t help you there, either.

I live in a city where the mayor is way above average in smarts and heads above his peers when citizens come before the council making outlandish comments, mimicking the anti-tax mantras spoken in their ears. These naysayer robots are taken to task quite often and asked to explain in more depth. In other words, PROVE IT!

I am making an offer to my mayor as well as to your mayor and council. When you are bombarded with the “we’re being taxed out of our home,” get their address and send to me. I want to see the numbers, but I may also want to explore deeper. If they have lost their job or have huge medical bills, I want to point out that it’s not their taxes causing grief in their life. I will pray for them, but I won’t let them get away with inflammatory accusations about the cost of providing local government services.