The role in Oil & Gas is big for Texas. You may think the concern is only for the oil patch to the west. But the HQs for many of these companies are in the metropolitan areas. Meaning engineers and executives. Meaning high paying jobs. Meaning the people who raise up the housing market and a ton of other economic benefits like property values and sales taxes from discretionary spending.

I’ve got a few charts to show you. One I have sent a few times in recent years. Another is a new one. If you don’t like to study charts, let me explain in a nutshell.

In a very short time frame, from early 2011 through yesterday, the price of West Texas Intermediate Crude (WTIC) has been as high as $113.93 and as low as $29.02 per barrel (42 gallons). As recent as last October, the price rose back to respectable levels in the $74 range. Then by the end of December 2018, the price plunged to $45.33. Since then WTIC has struggled to get back $60.14. I am far from being an expert, but my guess is that if WTIC stayed around $60, there would be many happy campers with nobody complaining when that price point translates to the gasoline pump.

The chart above shows rig counts, but I’ve added a chart below to zoom in on the critical points. Rig counts are just one metric, but many seem to watch for Baker-Hughes to release that information every Friday. If rig counts influence oil field decision makers, then perhaps we should keep an eye on it, too.

As WTIC prices rise and fall, rig counts generally do the same. Until they don’t. As the old saying goes, “the trend is your friend … until it bends at the end.”

Rig counts were pegged over 2,000 in the US when WTIC prices were in the stratosphere. At that time, Texas had about a third of the entire country. At the low point, May 20, 2016, the rig count had cratered to only 404 with Texas’ share rising to over 40%. As you can see above, the rig count peaked last November 9th and has been easing downward since then. Texas continued to rise to about 54% of the share in the US. Texas is down to 570 with the remainder of the US accounting for 511. It’s still early, but it appears a rollover is in process.

I would be remiss if I did not include the correlated numbers that touch the gas pump, meaning the pocketbook. The chart above may bring back some bad memories when we had to pay $4.00+ at the pump when processing, delivery and federal and state taxes are added.

You may also recall that the Texas sales tax numbers were headed in the wrong direction about the time WTIC dropped and the price of gasoline followed. It was huge, and it actually changed the direction of the Texas economy using the sales tax yardstick.

There is a reason for that, and Wal-Mart could tell you why. They measure the things that pour money into their stores by the ordinary citizen as well as the things that take money away such as tax law changes. An extra dollar per gallon in gasoline savings a week puts that money in their stores.  Just twenty bucks a tank full turns into big spending.

See the chart below of sales tax collections for all local governments. Note the slow down and then fall in the growth rate (the red line) in early 2013 even though sales tax dollars were edging up nicely. Look at the history to confirm that when the growth rate declines deep enough and long enough, absolute dollars also fall. For that to happen for Texas as a whole is quite remarkable.

But then as it was about to get ugly by early 2014, a valiant surge occurred. That was largely gasoline prices dropping. Then a drop occurred until the WTIC prices picked up with the improvement in west Texas helping the entire state as can be found up until 4-5 months ago. Remember that friendly trend? It started bending. With that piece of knowledge, WTIC prices and rig counts get more interesting. 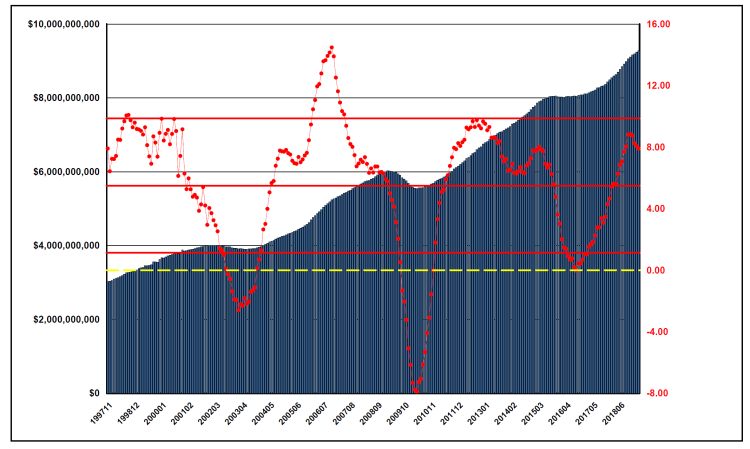 We are wise to take note of the status of WTIC prices and rig counts. There are few things in our economy that rise or fall faster than the oil industry. Not only can they fall quickly, but they can fall deeply. History provides plenty of proof that it doesn’t take long before this industry touches all parts of Texas.

Now you have been equipped with a tidbit of information that might help you sound intelligent at your cocktail party tonight. My wife and I will be going to a play at a small community theatre. I’m guessing that nobody there will care, but you never know. LFM