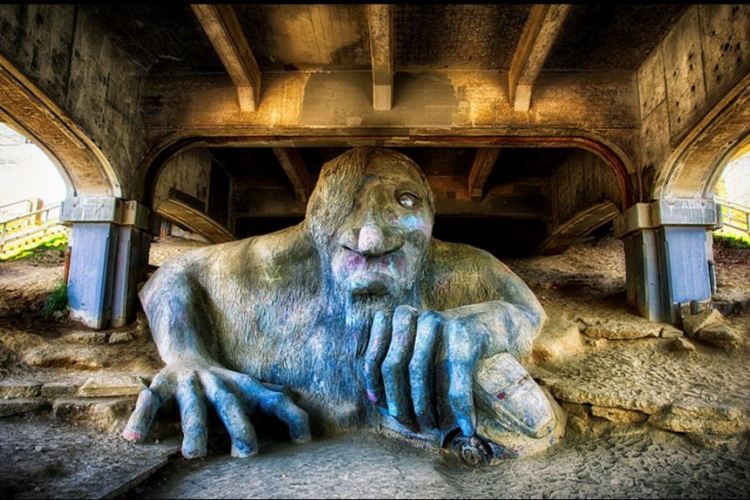 This Troll is located under a bridge in Seattle, Washington several miles from Bill & Melinda Gates’ $68 million home. I saw it on a bus tour on Saturday. It is visited night and day by kids, families and sightseers. How could you resist the invitation to go look for the troll hiding under a bridge? You can see the pedestrian bridges coming down both sides. That’s a full-size VW in his left hand. The hubcap resides in his left eye. There is a road in front of the troll to see it by driving under the bridge.

But this is end the of a story. Let’s work our way back to the beginning. The troll is the product of a neighborhood contest. A group was formed to come up with an artsy idea, and this was the result. A grant was provided to construct this attraction. Great idea, right?

Yet the motivation wasn’t to support the arts. The purpose of this troll was to solve a problem. A very ugly problem. This was the site for nightly drug use at the height of heroin addictions in Seattle. Police detectives were being called to this location almost nightly to deal with overdose problems. If detectives were called, then you know this was a death-related call – the kind that sends a team of people seeking the cause of death and another team seeking the drug dealer or murderer, either the direct or indirect cause of death.

At the risk of stating the obvious, let’s count off the people who might be involved in just one case like this. I’m sure I’m leaving some group out, but this is from memory.

Back when I was the Dallas County Budget Officer in my early career, I priced out the cost of just one trial. It was staggering back then, so I can only image the sticker shock today.

May I remind you that I mentioned the calls for overdoses and murders were routine. And it was just for this one location.

So, what if this wasn’t such an easy place to do drugs? Oh, and did I mention this problem in turn was creating a blighted area well beyond the spot in question as do all neglected areas where crime is left to move in?

That’s what the City in general and this neighborhood in particular wanted to address.

There is always the conventional alternative, and that is to keep adding costs triggered by one murder multiplying into 20 different areas of specialty – all at premium costs. Can you imagine the General Fund budgets for the City and County governments bloating up? Much worse, the money would grow as the problem grew, but not a thing would necessarily be done to solve the problem.

How do you stop that one murder from happening?

Lights, people and traffic motivated to come see an attraction was their answer. An investment instead of an expense. Hey, the protective shelter for Mr. Troll was already there! And imagine this – an art project investment turns into an economic development stimulator as the immediate area was reclaimed without corporate welfare!

If your first response is that all this did is to move the drug users and dealers to another location, then you have just revealed something about yourself. You are worthless as a problem solver.

Here is what I do know. The tax caps and cuts that are coming are real and will likely be severe, especially as they become cumulative over a period of a few years and then compounded by an economic downturn where real losses cannot be restored politically.

Here is a companion comment and a few questions. How many people working for you right now would be hired/re-hired today knowing what you know about them and their productivity right now? For each one of them, what are you doing to train/re-train, mentor, motivate, discipline or terminate? How many of them have 1 year’s of experience 20 times vs 20 years of continued growth in responsibility and contribution?

How many are good people, but they have just become way too expensive as the numerator has climbed with raises and generous benefits while the denominator has diminished with extra holidays, vacation days and sick leave days?

More than once in my career I have had city managers and department heads yelp like they had their legs chopped out from under them from a cutback – only to tell me privately that it was one of the best things that could have happened to make them step up to earn that part of their paycheck that includes making hard decisions they had been hesitating to make.

On The Other Hand

If your first response from the Troll story is that the demand side of your workload has got to be addressed, especially for services that require 24x7x365 coverage, then I apologize for scolding and only wish to provide encouragement.

I don’t like the way things are going with citizens and elected officials caring less about who gets hurt, that there is only one priority – cut taxes. I am working hard to provide analyses to show the fiscal impact for every city, county and school district in Texas. You should have already seen my report.

But you know what? They don’t care about facts. And I hear that nothing sets them off like being threatened with the consequences to public safety. I’ve even heard that one State Senator responds to that threat with “sometimes a few people may have to die.”

Here’s the deal. There are only a dozen or so ways to balance a budget. Improving Productivity is the first and Raising Property Taxes is last. LFM